In order to continue to provide lectures and courses to our members and friends we have launched TVAES Online, a series of events delivered online via zoom.  These have proven extremely popular and book up fast, for the latest events and availability please click here.

In line with UK government advice TVAES regrets that the remaining face-to-face lecture in Woodley for the 2019-20 academic year scheduled for June 2020 is cancelled.  We are currently working on the lecture programme for 2020-21 and at this point we expect to resume meetings on Saturday 12th September 2020.  We may reinstate a summer 2020 event if the situation permits but that is looking increasingly unlikely, but in the meantime we hope you enjoy our online provision.

Theban tombs and their reuse in the first millennium BCE - an online lecture
Saturday July 11th, 11.00 am to 12.30 pm click for details

The Female Pharaoh : Hatshepsut and her buildings - A five week continuation course started on Thursday 3rd June 2020
Course summary: Hatshepsut has long attracted interest and fascination as a rare example of a female pharaoh in dynastic Egypt.  This course will explore the reign of Hatshepsut with an emphasis on her art and extensive building programme as we look for clues that allow us to understand what was different about the years of her regency and co-regency with Thutmose III in comparison to her predecessors and successors.  Click for details

TVAES is registered with easyfundraising.org.uk – download the widget & enable donations when shopping online, or click the Stores link 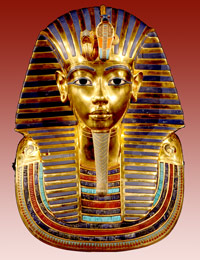 Mummy of ancient Egyptian teenager, buried in fine jewelry, discovered in Luxor
Archaeologists in Egypt have discovered the ancient mummy of a teenage girl decked out in beautiful jewelry, including beaded necklaces and copper earrings, according to the Egyptian Ministry of Tourism and Antiquities.

Ancient Egyptian Funeral Home Reveals Embalmers Had a Knack for Business
Known for their iconic pharaohs, pyramids and elaborate burial rituals, the ancient Egyptians were notoriously assiduous about the afterlife. It's perhaps unsurprising

Mummies discovered in burial shaft in EgyptDetails of the discovery are on the ministry's Facebook page shared via a video.