Drinking Wine, Baking Bread, and Making the Best of It: Humor and the Afterlife in Egyptian Tomb Scenes - An online ZOOM lecture 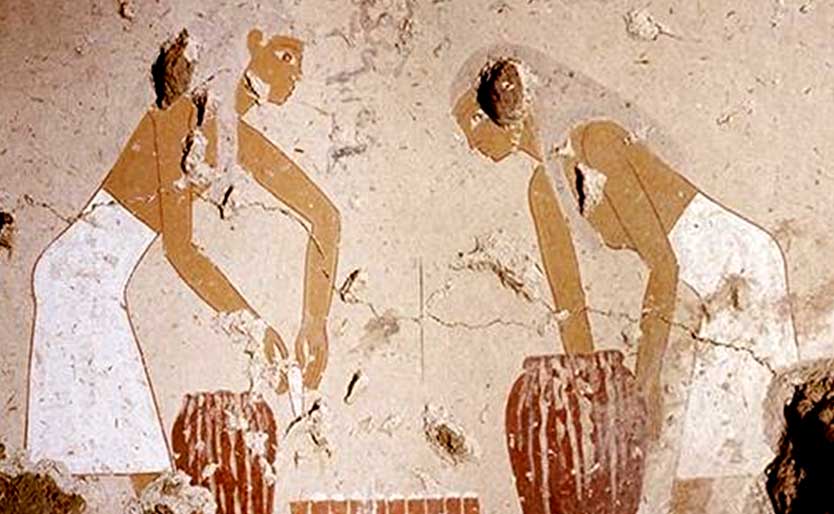 While under lockdown, many of us have turned to various diversions to distract us from the grim news of the day.  Our social media feeds reflect a carefully selected series of activities that we feel willing to share: baking bread, making elaborate meals, drinking wine or “Quarantinis,” in addition to the domestic antics of our pets.  In the face of the unknown, we turn to light-hearted activities to ease the burden of our lives.  Even as we navigate and share serious content online, we also turn to humour, levity, and even intoxicants to present a more balanced social face and to lessen others’ burdens as well as our own.

While ancient Egyptian tomb chapels are often presented as unrelentingly serious in their content, with every element potentially considered for its religious meaning or its role in the function of tomb as a miniature world or microcosm, even a casual visitor to a tomb cannot help but be delighted by the variety of scenes which often feature unmistakably humorous or light-hearted content.  Without a doubt, the humorous content, even in the midst of otherwise serious scenes, helped to draw the viewer more deeply into contemplation.  Banquets that at first look like rows of serious men and women turn out to be full of drunken chatter.  Markets where sober exchanges of goods are taking place can be disrupted by the apprehension of a thief, and the misbehaviour of baboons.  A literate ancient visitor to a tomb would have had an extra treat available in the form of captions, conversations, quarrels, songs, and arguments recorded as dialogue in the hieroglyphic inscriptions often written above such scenes.  Searching out and identifying co-workers, family members, ancestors and friends identified on tomb walls, and enjoying the antics of human and animal members of the Egyptian world was no doubt a great source of entertainment to the ancient visitors to a tomb.  The most clever tomb decoration combines visual and textual strategies in a manner similar to modern comics or graphic novels.  Even the manner of arranging the scenes could be highly creative, exploring various formats that approach the diversity of modern comic artists and the complex visual worlds of modern gaming, calling into question many of our long-held and wooden ideas about how to read or interpret ancient Egyptian narratives.  Examples in this lecture will be drawn from ancient Egyptian tomb scenes of many periods to illustrate some of the way that ancient artists used humour to amuse themselves and their audiences, while also populating the virtual world of the afterlife with characters, music, sound, and laughter.  These strategies enabled distraction from the darker aspects of life, while also encouraging more time to be spent in the tomb reading, saying prayers, eating and drinking – to the benefit of both the living and the dead.

Cost: Free for Members (enter the password in the box that appears when selecting a free members ticket) and £4 Visitors. Click to book

Joining : Use the zoom link emailed to you after booking to join the zoom from 1.45pm for a 2pm start

Since 1993, Stephen Harvey has been Director of the Ahmose and Tetisheri Project, which centers on excavation of the pyramidal complex of King Ahmose at Abydos, southern Egypt, under the aegis of the Pennsylvania-Yale-Institute of Fine Arts, NYU Expedition to Abydos.  Harvey’s fieldwork in and around the pyramid complex of Ahmose (ca 1550-1525 BC) has resulted in major discoveries, including several previously undiscovered temples, the identification of the pyramid of Queen Tetisheri, and the analysis of thousands of fragments of the temples’ decorative program.
Since 2000, Harvey has also been a popular lecturer and host on 19 tours to Egypt, Jordan and Lebanon sponsored by the Archaeological Institute of America, the  Smithsonian Institution, the Field Museum, the Explorer’s Club, and the Petrie Museum (London).